I am currently participating in a graduate course ENG5010 Contemporary American Literature at Eastern Illinois University. I earned my MA in English in 2001, but living in a university town has allowed me to make numerous connections, especially within the English education department. I have earned enough credits over the past years to top out on the school district pay scale. I now take courses of personal interest, such as last semester’s book review course, or courses that will benefit my teaching. This current class meets both criteria. I love multiple point of view and/or multiple timeline narratives and some of the novels would be wonderful additions to the curriculum.

Part of classroom participation is to write academic posts to share through our class Blogger site. I have included links to both the homepage and to my post for the week. This week’s novel was How the Garcia Girls Lost Their Accents. As I noted in my introduction, I had read the novel years ago, but I did not remember that it was told in a reverse chronological order with flashbacks sprinkled throughout.

My contention is that readers will miss the important clues about the girls language and identity if the novel is read quickly without attention to detail or if it is simply read once. To understand why and how the girls are the women that they are in 1989, the reader needs to reflect by reordering the chronology.

Please feel free to link to our ENG5010 blog to read my post or any of my classmates’ and feel free to share your thoughts. (Just an FYI, as academic posts, these are longer than many typical informal blog posts.) 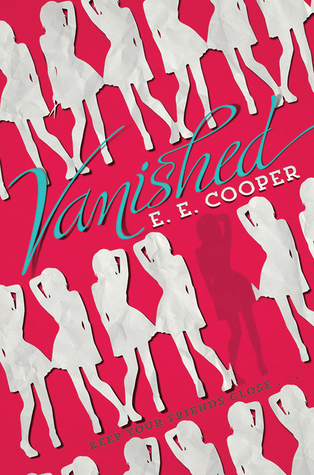 “Our group would become one of those urban legends that other kids talk about in hushed voices over summer campfires”—Mean Girls meets Gone Girl with one runaway, one suicide, and one losing her mind. E. E. Cooper’s Vanished has made the if-you-liked-Gone-Girl-then-you’ll-like-this-young-adult-novel lists, and those lists are spot on. Told from the perspective of Kalah, the younger transfer student who has been taken under the wing of the popular senior field hockey captains, the vanishing act occurs in chapter two. Beth, the girl from the middle class family unable to deal with the earlier loss of a perfect son, disappears on her eighteenth birthday. The disappearance triggers Kalah’s anxiety and OCD. In the meantime, Britney, the only child of wealthy but neglectful parents, discovers that her boyfriend may have been cheating with best friend Beth, which triggers her suicide. Once envied by everyone, Kalah becomes a pariah, detached from friends not sure what or who to believe, especially after she begins receiving emails from the missing Beth. Kalah’s realizations occur a little quickly for the lengthy build up, but readers will be left rooting for Kalah and wanting to know how she will exact her vengeance.

I make no secret of the fact that I typically do not enjoy reading young adult literature; I am not its intended audience, but more importantly, I find most of it formulaic. Nothing wrong with a formula and a happily-ever-after, but I want and expect more for my reading pleasure (I would probably consider my reading genre “literary fiction”). However, I chose Vanished and two other young adult novels because they appeared on a list of ya-books-to-read-if-you-liked-Gone-Girl. I liked Gone Girl, but the graphic violence and sexual references are too much for me to recommend it to students (it’s in our school library for any student who wants to check it out). I’m not sure why I chose to read Vanished first, but I’m glad that I did. As a debut novel, E. E. Cooper has a lot to live up to in her sophomore novel (that I will watch for and plan to read just based on the success of this novel).

The novel includes numerous allusion to Alice in Wonderland with the key to understanding the deception (which I won’t give away here) in “a line by the Queen of Hearts: ‘Sometimes I’ve believed as many as six impossible things before breakfast'” (220). Kalah’s anxiety is well depicted in her battles to not tap six times, in her panic attack, and in lines such as, “I’d already chewed my thumbnail down, exposing the tender flesh underneath, and I was working to complete the gnaw-manicure on my other fingers. It’s a good thing I wasn’t planning to hold hands with anyone soon” (278). Not only is the nail symbolic of Kalah–“tender flesh underneath”–but “gnaw manicure” summarizes in two words the toll that anxiety has had on Kalah and on the reader. Of course, for the plot, one of the girls has to be a sociopath, but she is believable and a little scary in that everyone would describe her as “normal.” But it is a work of fiction; I can accept a teeanaged sociopath.

As I said in the review paragraph, Kalah’s aha! moment is rushed. And while she is the narrator, I would have liked to understand about the problems at her previous school earlier; that backstory is also rushed at the end, but would have been more impactful if both the readers and the authorities had known about it, which would have undermined some of Kalah’s credibility but added to the suspense. The story ends without a final resolution, much like Gone Girl. I’m okay with that; I expect that Kalah has learned much and will be very successful in her vengeance.

This novel is most definitely for high school readers; I would even suggest it to my college-aged students. And, to repeat myself, keep an eye out for E. E. Cooper’s next book; I expect her to become an author that I recommend to my students without having read a new book because her writing is that good.

The End of Fun by Sean McGinty 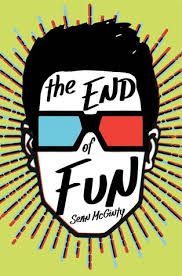 “FUN—the latest in augmented reality—is fun <yay!> but it’s also frustrating, glitch, and dangerously addictive <boo!>,” so everyone should put down his or her personal electronic devices and rejoin the “real” world. Sean McGinty’s The End of Fun, which will be published April 2016, opens with main character Aaron telling his readers that to terminate his contract with FUN he must earn 100 YAY!s first, so he recounts the past year of his life in 100 quick-to-read chapters. Comparisons to M. T. Anderson’s Feed are inevitable, but while Feed had a dark foreboding dystopian tone, The End of Fun is a light-hearted romp through desert of Nevada. Just as Aaron’s story starts to drag, a treasure hunt is added that livens up the romp. The brief description of what people look like while using FUN adds some humor that could have been expanded, especially if McGinty wants to convince teens that they look silly staring at any event through a 3-inch screen rather than watching it directly with their own two eyes. The possible environmental effect of FUN, which implies that we don’t know what problems we could be creating with our current technology, hits home, but, again, maybe not enough to convince teens to unplug. However, kudos to Hyperion/Disney Book Group for publishing a book that is for 14-18 year olds (due to drug/alcohol use and sexual content).

I received this book as an ARC at NCTE 2015. I was excited to see Disney (through Hyperion) publishing books for teens. At previous NCTE and ILA conventions that I’ve attended, Disney has promoted mostly middle level novels. I wanted to read this book over winter break because it had all the right words on the back blurb to interest me, and more importantly, to be a book that I can recommend to my students who prefer their gaming and electronics to my novels. And while I will add this to the short list of novels that cover those topics, this book is not at top of my recommend list.

It is very possible that The End of Fun pales in comparison to the novel that I just finished, Where Futures End. Both books imply that our electronic usage will have an unforeseen environmental effect in addition to the personal negative impact. However, Where Futures End is a much more sophisticated book. The fun style (word choice intended) of McGinty’s book would be more appealing to 8th/9th/10 graders, but the mature content is more appropriate for 10th/11th/12th graders. And McGinty’s structure beats you over the head with “electronics are not fun” on page one through page 405. His message is not a mystery.

I actually considered abandoning the book (which I always encourage my students to do when they would rather eat broken glass than read another word) around chapter 40 because I didn’t care what was happening to Aaron, and I was confident that after chapter 100 he would be able to terminate FUN. But, an old-fashioned treasure hunt to find Grandpa’s missing money was introduced to liven up the tale. Once again, by the end I didn’t care how Aaron’s life turned out; he terminated FUN, and we should all just have fun in real life. Got it.

My World , My Words!

A Better World through Books

reading as an act of radical love

Students in charge of a corner of their universe

Life after trauma with 100 dreams

Learning about reading, writing, and thinking in a high school English classroom.

A man only learns in two ways, one by reading, and the other by association with smarter people. Will Rogers

It's About Making Space

Where the making makes space.

Thoughts and Ideas from a Classroom Teacher

Hey, I'm Skyler and this is my blog about my blessed and crazy life!

a Talks with Teachers site